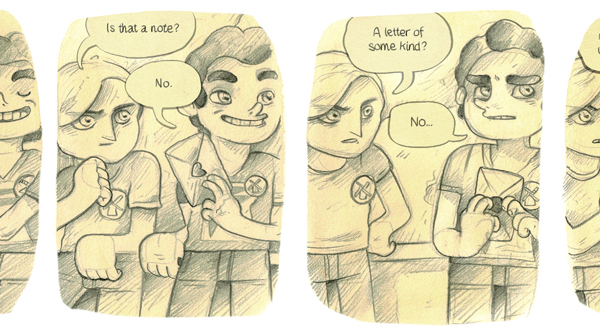 Another page, back to back due to the delay caused by my flights.

Jump over and read the whole thing here.

“Dating” in primary school was such a strange phenomenon, with it’s own rituals, rites and passages that had to be navigated to the end goal of? Usually avoiding and not talking to the person you were supposedly dating. I remember there was a theory that you should get a guy that the girl you liked, liked, to ask them out for you. Sometimes a note was accompanied, sometimes not. I think the logic was a little fuzzy and I can’t quite wrap my head around it.

Does anyone else remember the weirdness of it all?

With the layout of this page, I wanted to play with a fixed camera. I love long, drawn out shots in film, with characters doing their thing for minutes on end. The stillness of it. I wanted to let these characters act, using their bodies, their faces, their hands.

I think replicating this in comics however, in the way I have tried, creates a different sort of experience. It becomes more about a rhythm, a pattern, a metronome. It’s not the same thing. Maybe in comics the equivalent is a large, calm panel. These panels work great for stretching out time, but it feels like a silent, slow motion kind of thing.

How do you describe the passage of conversation within that stillness without creating panels with an overflow of balloons, or a large series of identical panels… Something to work on and ponder.